Sacramento-area leaders came together October 18 to mark the 20th anniversary of the Sacramento Groundwater Authority (SGA) and two decades of progressive groundwater management. 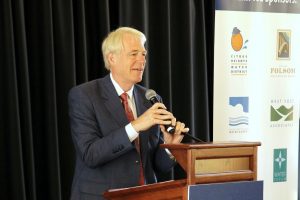 SGA was created in 1998 to manage the groundwater basin in northern Sacramento County. A product of the historic Water Forum negotiations, SGA became one of the first groundwater management agencies of its kind in California.

“What made SGA work was a shared commitment to an overriding public policy goal—to equitably and sustainably manage groundwater,” said former Assemblyman Roger Dickinson in describing his involvement with establishing SGA when he was a Sacramento County Supervisor.

At the time, groundwater basins in California were largely unregulated, with the exception of adjudicated basins that had undergone decades of costly legal proceedings. The cities of Sacramento, Folsom, and Citrus Heights, and the County of Sacramento created SGA by signing a joint powers agreement (JPA), which had never before been used in California for groundwater management and allowed all groundwater users to have a voice in the basin’s management.

This structure and experience with SGA ultimately influenced Dickinson’s work as co-author of the landmark Sustainable Groundwater Management Act (SGMA) of 2014. “My own experience with SGA heavily influenced my thinking about how to create a framework for SGMA,” Dickinson said, noting that SGMA allows local communities to design their approach to managing groundwater while the state serves as a backstop for compliance.

Since 1998, SGA has been responsible for many accomplishments. Chief among these has been development of a management program that allowed the area’s once over-drafted basin to recover to levels that are sustainable. SGA has also provided a forum for dealing more collaboratively with groundwater contamination and produced a successful conjunctive use program to safeguard both water supplies and benefit the environment. 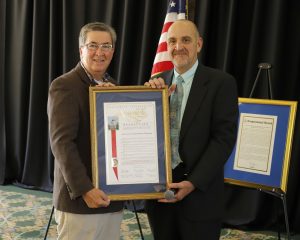 During the event, Assemblymember Ken Cooley of California’s 8th District presented a resolution recognizing SGA for its achievements. “The most powerful thing in the way we govern ourselves is when we join together in a common enterprise,” Cooley said.

Looking ahead, SGA is well positioned to continue its work to fulfill the Water Forum Agreement and comply with SGMA. “But that’s only the beginning,” said SGA Executive Director John

Woodling. “The groundwater basin will become increasingly important for water supplies and for the ability it provides to maintain the health of the lower American River. There’s a lot more for the future of SGA on the horizon.”

Read the SGA story, “Celebrating the 20th Anniversary of the Sacramento Groundwater Authority.”